Discovery of a Giant Gold Deposit in Alaska - Donlin Creek

In 1988, Dr. Paul Graff from Casper, Wyoming stopped by my office in Laramie. He was heading up a team to explore for gold in Alaska for WestGold and they needed someone with experience in detailed mapping. I had already built a reputation for my ability to unravel complex geological terrains while working at the Geological Survey of Wyoming. Since 1977, I started on my goal to map most of the state's gold mining districts, greenstone belts, kimberlite and lamproite fields and historical gold and copper mines. By time I left the Survey in 2007 due to gothic politics that resulted in a turnover &gt;40% of the productive staff, I had mapped &gt;1,000 square kilometers of Wyoming in areas that no one else wanted to work due to the complexities of resolving the structural elements, units, metamorphism and forms of alteration. Most terrains I ended up mapping could be liken to someone ramming an automobile into a light post at 100 mph. Things were bent, broken, wrapped around itself and parts were missing. Even though other geologists avoided these terrains, I loved working with these kinds of puzzles and even before I left the Survey, I was receiving consulting offers from international gold companies for mapping projects in similar terrains around the world. In addition, I had built an unmatched reputation for finding new mineral deposits.

The mapping of old gold and copper mines was fascinating. In many of the >40 historical underground mines I had mapped and later mapped that I published in a couple of books I wrote (Hausel, 1989, 1991, 1997), I was the first person to enter several of these mines in several decades. I also had considerable experience in non-deformed volcanic terrains. When I was at the University of Utah and University of New Mexico, Tertiary and Quaternary volcanic rocks were my specialty. And while working at the Geological Survey of Wyoming, I also explored volcanic rocks associated with porphyry copper-silver mineralization in the Absaroka Mountains, gold at the Mineral Hill district and in 1981, I had discovered a few dozen gold anomalies in the Rattlesnake Hills greenstone belt. It is rare for a geologist to discover a new mineral deposit, but even rarer for one to find a whole new district!

The Rattlesnake Hills were missed by everyone else, but I found gold at several locations in the district and in different types of deposits (Hausel, 1994, 1995, 1996). I had predicted the district would yield large-tonnage, low-grade gold deposits due to presence of &gt;40 Tertiary alkalic intrusives that erupted through the greenstone terrain and because of the brittle breccias I found adjacent to Sandy Mountain and Oshihan Hill and the stockworks I found south of Oshihan Hill (Hausel and Jones, 1982a, b). Years later, I also mapped the Leucite Hills volcanic field in southwestern Wyoming (Hausel, 2006). So, I took leave from the State and signed up for another consulting job and headed to Alaska in 1988. I had a great time and it worked out so well that I returned in 1989 - I love Alaska and I can understand Sarah Palin's love for this state! But little did we know, we were about to discover one of the largest gold deposits on earth. And we were optimistic - something that is a requirement (but lacking in most) for good exploration geologists!

According to the mining history of Alaska, placer gold had been found in the Kuskokwim River basin in the 1800s. Prospectors worked the George, upper Holitna, Tuluksak, Salmon and Kwethluk rivers; the New York, Bear, California, Marvel, Taylor, Forty-seven, Canyon, Crooked, Julian, Donlin and Flat creeks; and Murray, Snow, Ruby, Quartz, Queen and Lewis gulches. The Nixon Fork mine, 30 miles northeast of the McGrath village, had limited production in 1917 and again in the 1950s. The deposit was a high-grade gold-copper skarn with at least 131,500 ounces of gold (Bluemink, 2009). Eighty miles north of the Nixon Fork, placers in the Ruby district yielded sizable nuggets including the largest found in Alaska (294-ounce nugget from Swift Creek discovered in 1998). Nuggets were also found nearby at Long, Poorman and Moose creeks. The presence of large nuggets suggests a possibility of nearby hidden rich lodes.

Seventy-five to 100 miles southwest of McGrath, gold placers at Snow Gulch and Julian Creek were found in the Georgetown district - these would later become known as the Donlin Creek deposit. Gold is also found in nearby Omega, Lewis, Quartz, Ruby and Queen Gulch. This region attracted the interest of geologists because of pristine the gold flakes found in the streams by prospectors and the fragile gold nuggets which suggested a nearby source. As a result, WestGold began exploration in this region in 1988 which led to discovery of a large, disseminated, gold deposit with associated with anastomizing granodiorite to rhyolitic dikes intruded into graywacke (Hausel, 1988, 1989a). Drilling over several years identified proven and probable resources of 29.5 million ounces with an additional indicated resource of 10 million ounces. This was an Elephant (so to speak in the exploration business)! Donlin Creek has a gold resource similar in value to the legendary Homestake mine in South Dakota which produced 41 million ounces over a century of mining. Donlin Creek also hosts as much gold as has been mined in all of Alaska from 1869 to 2007!

The deposit consists of felsic sills and dikes that host gold in association with sulfides, quartz veinlets and breccias. Higher gold values are associated with arsenopyrite, stibnite and quartz in dikes and sills that intrude a thick sequence (&gt;5000 feet) of folded Cretaceous graywacke, sandstone and shale. Plans are for a mine to yield 1.5 million oz/yr from ore averaging 0.07 to 0.08 opt Au.

Flying into Flat Alaska for 4th of July celebration, 1988.

Donlin Creek consists of northeast-trending mineralized dikes and sills in a region 1.2 miles wide and 5 miles long (T. 23 N., R. 49 W). The lode is Alaska's largest gold deposit which runs along a ridge east of Crooked Creek at the heads of Lewis, Queen, Ruby, and Snow Gulches. The deposit consists of calcareous shale and graywacke of the Upper Cretaceous, Kuskokwim Group which strike west-northwest and dip 10-50o SW and are cut by a swarm of Tertiary age rhyodacite to granite-porphyry sills and dikes that trend northeast (Hausel, 1988, 1989). Late northeast and northwest-striking, high-angle faults offset the mineralized zones (Miller and Bundtzen, 1994; Vaillancourt, 2002; St. George, 2004).

Dan Hausel mapping on ridge at Donlin Creek with Snow Gulch in background.

The deposit is developed in the felsic dikes and sills, with lesser amounts of mineralization in graywacke, particularly where north-northeast trending fault zones intersect mineralized felsic intrusions and graywacke host rocks. The ore minerals are primarily gold-bearing arsenopyrite and arsenian pyrite which are disseminated in the felsic igneous rocks and in veins and networks of veinlets in the igneous and sedimentary rocks (Hausel, 1989b). The veins and veinlets consist of quartz and carbonate gangue, with gold and several ore minerals. The gold occurs mainly in arsenopyrite and stibnite (Hausel, 1989b). In addition minor chalcopyrite, cinnabar, cassiterite, covellite, galena, marcasite, molybdenite, native arsenic, pyrrhotite, sphalerite, scheelite occur in minor amounts.

The gangue and alteration minerals include crystalline and chalcedonic quartz, carbonate minerals and dickite. Garnet and high tin in some granite porphyry dikes indicate that at least part of the intrusive suite is peraluminous. Based on crosscutting relationships, altered carbonated mafic dikes initially intruded followed by intermediate and felsic dike intrusion. Other than clay, weak sericitic alteration and disseminated sulfides, there is little evidence of thermal alteration of the host rocks (Bundtzen and Miller, 1997). Miller and Bundtzen (1994) report that the felsic dikes vary from 65 to 71 Ma. Gold is disseminated in sulfides, sulfide veins, and in quartz-carbonate-sulfide veining in sericitically-altered igneous rocks (Hausel, 1989b, Szumigala and others, 2000). There is a positive correlation between high fracture density, alteration, and the amount of gold.

Ore shoots are developed in dilatant zones along normal faults where faults steepen in felsic intrusions and graywacke. Alteration assemblages include sericite, illite, kaolinite. dickite, carbonate and pyrite (Hausel, 1989b, Szumigala and others, 2000). Drilled resources places this deposit in the top 30 gold deposits known in the world (Novagold Press release, January 28, 2002).

Left - brecciated and rehealed Kuskokwim graywacked with veinlets of quartz and calcite collected in 1988 by Hausel. 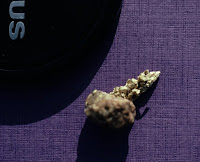 Left- Fascinating dedritic gold nugget on rounded pebble, Snow Gulch, from Spencer Lyman. Paul Graff suggested that this steam-rounded pebble provided an organic-rich seed for gold to precipitate out of the water and deposit on the side of the pebble. According to Spencer Lyman, it was not uncommon to find nuggets like this one. 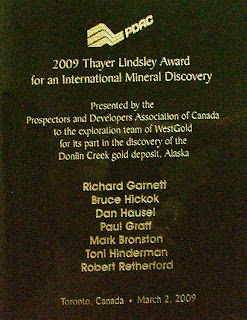 In 2009, a group of seven geologists were awarded one of the highest honors in economic geology - the Thayer Lindsley Award for a Major International Gold Discovery for their work at Donlin Creek. The Award presented in Toronto recognized the accomplishments of Mark Bronston, Richard Garnett, Paul Graff, Dan Hausel, Bruce Hickok (RIP), Toni Hinderman (RIP) and Robert Retherford. A video by NovaGold explained the history of discovery. Thank you Dr. Paul Graff for asking me to work on this project - it was fun other than the Mills Brothers tape, which was later fed to the fish.