Following discovery of a world-class diamond deposit in the Northwest Territories of Canada in 1991, one of the greatest mining rushes in the history of Mankind ensued that continues to present day. A few thousand barren and diamondiferous kimberlites, lamproites and lamprophyres (the principal host rocks for diamond) have been discovered in Canada since the discovery of the rich Lac de Gras kimberlites at Ekati in the arctic north, and more are being found every month.

Three major mines (Diavik, Ekati and Jericho) were developed. Ekati began production in 1998, Diavik in 2003 and Jericho in 2006. But Jericho ran into problems. After a 2006 start-up with significant production that included a 59-carat gemstone, the ore grade did not match recovery and the mine ran into financial problems. Recovery was considerably lower than anticipated and mine costs rose followed by the company filing for bankruptcy in early 2008.  Even with this failure, other mines are under construction and/or permitted (Snap Lake, Gahcho Kue and Victor) with other properties in a feasibility stage.

The costs of mining in the arctic are high. Capitalization for the Ekati was >$1 billion. Prior to 1998, Canada had not produced a single diamond commercially, yet our neighbor to the north surpassed South Africa in diamond production!  In 2003, rough Canadian diamond production amounted to 11.2 million carats valued at $1.7 billion, or about 15% of world production. And this doesn’t even consider the value of the finished product (faceted diamonds set in jewelry are often >10 times more valuable than the rough stone).

Diamond deposits occur in clusters.  These clusters have been traced south to the US border. So why are we not seeing major discoveries in the US? The principal reason is politics. US mining laws are unfavorable for investors and mining companies – this coupled with the US having one of the worse reputations in the world for exploration, mine and mill permitting, pose formidable obstacles to future exploration and development in the US.

However, one can drive to most kimberlites and cryptovolcanic structures in the US and not worry about roads melting in the spring and summer months – this should offset some concerns and keep exploration costs considerably lower in the US. Even so, capital investment for exploration and development for diamonds in Canada has been more than 1000 times higher than the US. With so little money invested in US exploration, it is a wonder that any diamond deposits have been found. Yet, geological evidence supports that the Wyoming Craton (Colorado-Montana-Wyoming) is highly mineralized and likely to host hundreds to possibly thousands of diamond deposits.  Even so, W. Dan Hausel discovered 9 diamond deposits in the 1970s while mapping the State Line district along the Colorado-Wyoming border and later found evidence for a few hundred diamond deposits in Colorado, Montana and Wyoming - nearly all remain unexplored and many could easily be claimed in a short period.

Secondary diamond deposits are found downstream from primary host rocks. For the weekend prospector, placers offer great potential. In the Colorado-Wyoming State Line district alone, there has to be hundreds of thousands if not millions of diamonds in the surrounding streams, since the majority of streams in this district drain 40+ diamondiferous kimberlites, yet there has been no effort to sample these. The west coast of the US (particularly California) is another place with considerable placer diamond potential: hundreds of diamonds (many sizable) were found in past years by Californian gold miners (Hausel, 1998).

Kimberlite. Kimberlite is the principal host rock for diamond. Kimberlite is found at a number of places around the world, but the best place to find diamondiferous kimberlite is very old continental regions that are known as cratons. Cratons are very old, stable continental cores that contain rocks older than 1.5 billion years. The largest craton in the world is the North American craton, which is actually formed of several smaller cratons. The North American Craton underlies large parts of Canada and the US. One way to find cratonic rocks is to search published geological maps for Precambrian rocks. If the Precambrian rocks are older than 1.5 billion years, you are likely within a craton; the older the rocks the better. These old rocks continue under the much younger sedimentary basins in the western US.

When kimberlite or its alterated rock or clay is found, it will appear to be out of place compared to the surrounding terrain and rock. This is because kimberlite is found in small dikes and pipes (the core of a kimberlite volcano) and is one of the rarest rock types on earth. Kimberlite is a hydrated, carbonated, olivine-rich rock in which most of the olivine has been altered to serpentine, a soft green replacement mineral. In general, kimberlite can be thought of as a serpentinite (a rock formed primarily of serpentine). But most serpentinites are not kimberlites. 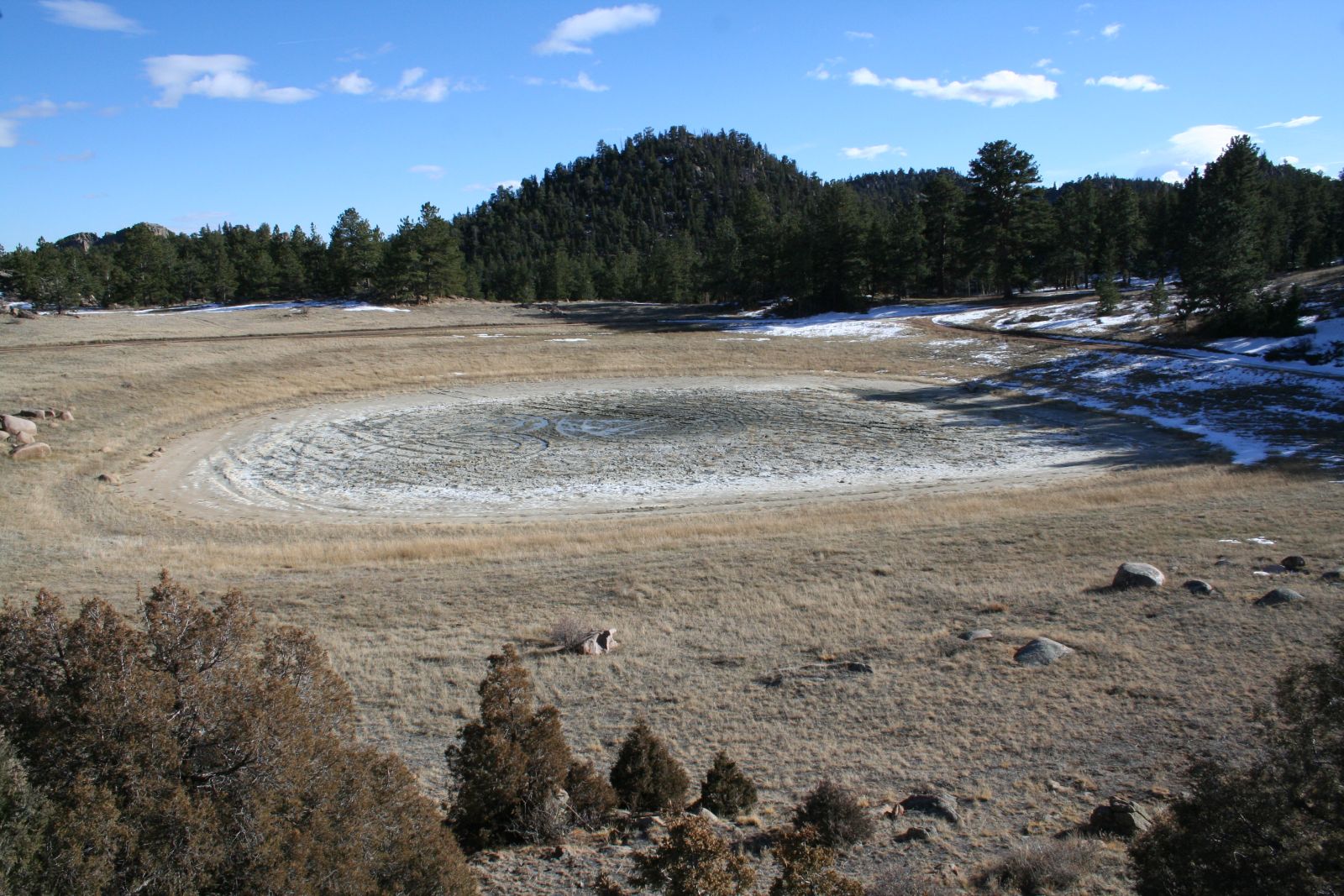 Left - cryptovolcanic structure in Colorado. Note this forms a distinct depression and the soil in the center contains considerable calcium-carbonate even though the basement terrain is all granitic with no known carbonates.

Kimberlite contains considerable carbonate such that when a drop weak hydrochloric acid is placed on a fresh broken surface, the rock will effervesce and emit CO2 gas. Kimberlites contain xenoliths and xenocrysts (rock fragments and crystals from country rock) as well as unusual minerals and rocks from great depth. Some are extremely rare, some are gemstones and some are collector’s specimens. For example, gem-quality diamond, Cape ruby (pyrope garnet), almandine garnet, spessartine garnet, Cape emerald (chromian diopside), and chromian enstatite are all gemstones that have been recovered from kimberlite. 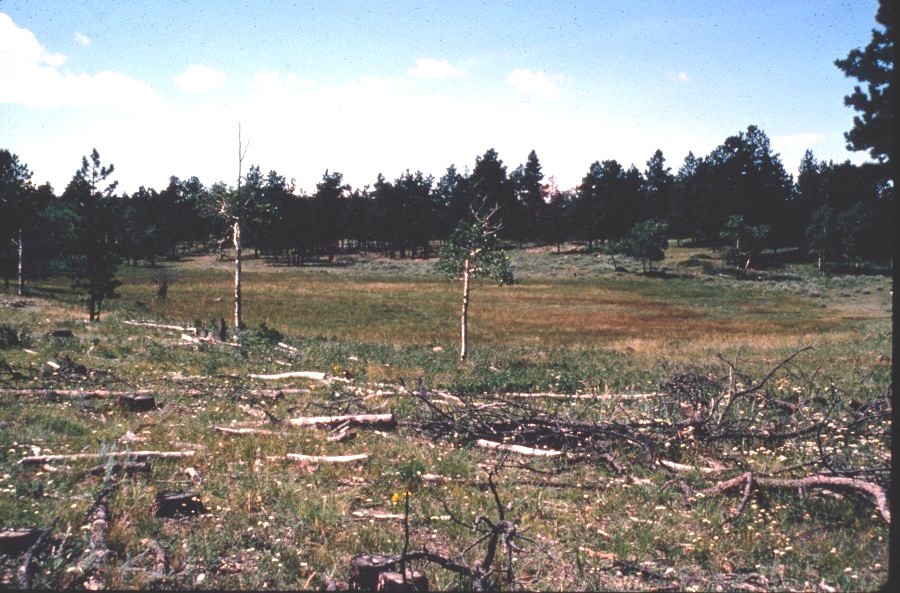 Another cryptovolcanic structure that later was proven to be a diamondiferous kimberlite - the Maxwell kimberlite in Colorado.

Kimberlite is a volcanic rock that erupts in small maar volcanoes referred to as diatremes (or pipes). These pipes are not the typical volcanoes. Instead of forming a cone or hill, kimberlite volcanoes blast out circular depressions known as maar. At eruption, kimberlite magma is under such high pressure that it essentially explodes. Visualize a shot gun blast coming from the earth and this is probably what kimberlite would look like during eruption, but on a much larger scale.  As a result kimberlites are highly fragmented and brecciated and contain foreign rock fragments that are a few inches to several yards across.

Kimberlite pipes and associated dikes are small: the largest produce circular anomalies 500 to 3000 feet across. If there has been much erosion through geologic time, the kimberlite pipe will exhibit irregular to elliptical plan shape. In cross section, kimberlite pipes are carrot-shaped and narrow down to a root zone at a linear feeder dike.

Often small ‘blind diatremes’ rise from kimberlite dikes that represent a magma bubble that lost upward mobility due to degassing along the dike. In the Colorado-Wyoming State Line district, a kimberlite with one of the highest diamond ore grades was the Sloan 2. This pipe was interpreted as a blind diatreme (McCallum and Mabarak, 1976). A group of blind diatremes were detected at shallow depths in Wyoming by a geophysical survey, yet none were ever drilled, even though they are surrounded by diamond pipes and dikes. The location of these anomalies is shown on a map published by the author (Hausel, 1998).

Because of distinct differences in chemistry and hardness between kimberlite and most country rocks, many kimberlites form small circular, elliptical, to linear treeless grassy parks or shallow depressions. Some of these will contain shallow ponds or lakes because kimberlite is much softer than the country rock and erodes faster. Blue clays (montmorillonite) produced during weathering (referred to as blue ground) are impervious to water and choke most woody vegetation. Dramatic vegetation differences between weathered kimberlite and the country rock may occur.

Grass growing in kimberlite in the early summer usually stands higher and is generally denser than surrounding areas. This is because the kimberlitic clays pond water near the surface and provide a good source of water for vegetation with shallow roots. In some cases, a kimberlite may be outlined by a small circular stand (bulls-eye) of aspen trees. The soil over the kimberlite will contain considerable montmorillonite (bluish to grey clay).

The majority of primary diamond mines around the world are developed in kimberlite such as Wesselton, DeBeers, Kimberley, Dutoitspan, Ekati and others. Placer (secondary) diamond deposits, particularly beach placers along the west coast of Africa, have also been productive. Lampietti and Sutherland (1978) reported that 10% of known kimberlites were mineralized with diamond. This statistic is no longer valid since as many as 50% of kimberlites found in Canada and Wyoming in recent years, and as many as 90% in Colorado, have yielded diamond. Even so, only a very small number of kimberlites contain enough diamonds at high enough value and grade to be mined.  It was also suggested that <1% of all kimberlites contain commercial amounts of diamond (a statistic that is still valid). When economic, kimberlites may contain hundreds of $millions to $billions in gemstones.

Following a fracture that contains kimberlite will often lead to other kimberlite pipes, dikes or blind diatremes. When I mapped a group of kimberlites in the State Line, Iron Mountain, Indian Guide and Sybille Creek districts of Wyoming and Colorado, Hausel found 9 previously unknown kimberlites in the State Line district simply by paying attention to the structural trends and discovered nearly 70% more kimberlite than had been identified in the Iron Mountain district in Wyoming, and found a few hundred cryptovolcanic depressions in 9 separate districts with characteristics similar to kimberlite. A cryptovolcanic structure is simply a structurally-controlled circular depression that has characteristics similar to kimberlite but remains untested. A kimberlite in Riley County Kansas, known as the Winkler, is so prominent and circular that it had originally been mapped as an impact crater. However, later work showed that the Winkler Crater was actually a kimberlite pipe.

Many kimberlites form shallow depressions. Some ponds that occupy kimberlite have rounded boulders that are partially assimilated crustal and mantle xenoliths that were polished by the kimberlite as the magma erupted. In some cases, these have been misinterpreted as dry placers. When Hausel discovered the Bowling Pin cryptovolcanic structure in Wyoming (a probable kimberlite), it contained numerous rounded cobbles stained by carbonate. It reminds one of the historic discoveries in the Kimberley region of South Africa, where initial reports suggested the diamondiferous kimberlites were dry placers.

Potentially, $US billions in diamonds await discovery in the Colorado-Montana-Wyoming region. W. Dan Hausel Geological Consulting LLC can place your company or investors into a unique position by tying up many of these structures, attempt to tie up some known diamondiferous kimberlites, and continue exploration in this region. It would require a significant investment. If interested, Contact us.